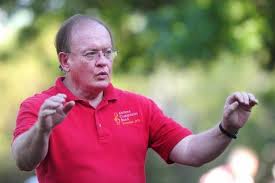 The director of the Abilene Community Band is Joe Stephens. Joe has been a member of the band since its inception in 1976 and has served as its musical director since 1979. He is a native of Abilene and a graduate of Cooper High School. Joe attended McMurry University and earned both a bachelors and masters degree in music education from Hardin-Simmons University. While at HSU, he was inducted into Phi Mu Alpha Sinfonia, honor music fraternity. He served in the United States Army, performing in the 4th Army Band and the 4th Army Chorus at Fort Sam Houston. He has taught music and directed bands at Mann Middle School since 1971 and in 2003 he was honored as teacher of the year at Mann Middle School. He is active in both Texas Music Educators Association and Texas Bandmasters Association.  He has performed with the Abilene Philharmonic Orchestra, the Big Band of Austin, Freddy Woolridge band, Dave Adams Band, B.A. Waldrop band, Chris Binion Band and every summer with the rodeo band in Stamford, Texas. Joe’s passion is the Abilene Community Band which has played for President George Bush and Governor Rick Perry.  He presently teaches band at Abilene Christian High School.  Joe and his wife, Merry Sue, have one son, Brad.